At True, we love to fund companies that democratize access and value. We have seen tremendous success with this from Automattic (maker of WordPress), Duo Security, Teachers Pay Teachers, and one of our most recent investments, VoiceFlow, among others. We see Upsie following this same trend as it establishes a new standard for product warranties that are dramatically more affordable and widely consumable.

Upsie Founder Clarence Bethea and his Minneapolis-based team have created a consumer-friendly platform where anyone can purchase transparent warranty plans that can be easily exercised years down the road if something breaks.

The current alternative is purchasing expensive warranties from big-box stores in a rushed decision at check-out. (Lose your receipt and you’re out of luck.) These check-out driven warranties are known to be marked up often by 100-500 percent, whereas Upsie’s plans cost up to 70 percent less than competitors.

Early on in the company’s formation, Clarence, who has consulted for numerous consumer electronics companies specifically in regards to their extended warranty businesses, discovered the underbelly of the warranty industry.

“More than half of Americans don’t have $1,000 in their savings accounts,” said Clarence. “It’s not a surprise that they can’t afford to replace a device if it breaks. We think this industry has taken advantage of consumers. It’s not fair and transparent. We made a way for people to protect these great devices within their means.”

From an investment standpoint, we love meeting founders who bring deep domain expertise and both product and business model innovation to traditional industries. 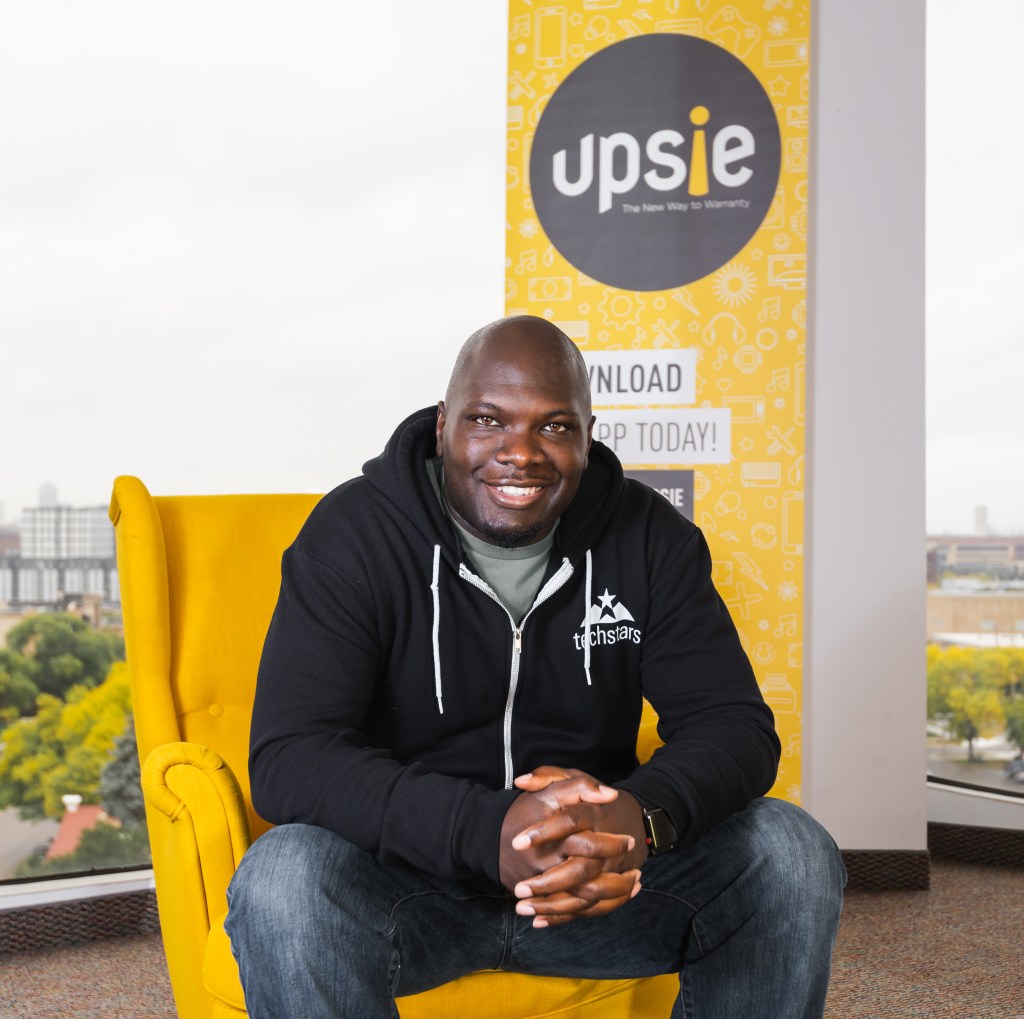 Clarence Bethea is the founder and CEO of Minneapolis-based Upsie.

We are also thrilled to see another Midwest company that’s creating a thriving community around their organization and mission. “This just doesn’t happen in our city where a Silicon Valley venture firm comes around and decides to fund a company,” said Clarence. “Being a Black founder and having True behind me and the team is really important to send a message to the rest of diverse founders that you can do it.”

One attribute that stuck with us in our conversations with Clarence was his intimate knowledge and near obsession to serve the customer. “We have a little chip on our shoulder and believe the customer should come first in everything we do,” said Clarence. “That chip is about doing right by our customers and not caring about what anyone else thinks when we prioritize that over everything else. We are fanatics about our customers and we won’t stop until we solve these problems for them.”

He recalls a customer who called the company to share her story when Upsie was still in beta. The customer struggled to save enough money for her daughter to attend college and then continued to save to buy her the very best laptop possible. That customer saved just enough to purchase a MacBook Pro plus tax, with a little left over. Then, at check-out, she learned it would cost nearly $400 to purchase a warranty for her daughter’s laptop. Discouraged, she remembered that someone had told her about Upsie, so she looked it up. “The warranty through Upsie was $171.52,” recalls Clarence. “We made it possible for her to do that for her daughter.”

We are honored and humbled to be working with Clarence and the entire Upsie team. We see tremendous potential for the company and can see it becoming a leading brand and creating a new category, all while having a lasting impact on people’s lives. It’s a story we simply had to be a part of.

“I’m originally from Atlanta, Georgia, and I’m a ‘hood kid that got lucky,” he says. “I didn’t go to Yale, Harvard, or MIT. I’m really that guy that has been through a lot to get here. Growing up in a tough situation has allowed me to become a better leader, husband, and father. It makes me humble to be where I am today and raise money from a firm that’s committed to our vision.”

Learn more about Upsie in TechCrunch.