For every new company creating autonomous machines, there is debate about whether or not, when, and how robots will take human jobs. It’s a timely and important discussion, especially in terms of workers whose primary tasks are repetitive, easily learned, and repeated accurately by machines.

Yet the discussions are occasionally distorted and sensationalized by the media; arguments shift to what is feared instead of what is gained long term. This has been the case numerous times in human history. Name an invention and there was likely some fear around its use in the beginning. On Last Week Tonight With John Oliver, the comedic host reminded his viewers of the fear of job loss among bank tellers upon the invention of the ATM. “Their jobs didn’t go,” noted Oliver. “They changed.”

Harvard Business Review recently published the findings of a study examining how automation affects individual workers. While automation does decrease the amount of work available and increase the chance of workers leaving their jobs, loss of work resulting from automation is far less than what is experienced following, for example, a mass layoff. The study notes that while mass layoffs have a sudden, immediate effect on the workforce, the decline in work resulting from automation tends to be more gradual, giving workers time to adjust and redirect their efforts.

That’s, perhaps narrowly, seeing the glass half full and entirely ignoring the table it sits on. As the HBR article suggests, highly educated, highly paid workers are affected more frequently by automation, but they can find new jobs faster. Workers with fewer skill sets who are paid lower wages tend to feel the effects of automation to a greater degree.

This is one of the reasons why entrepreneurs who are creating automation technologies should focus keenly on automating the right kind of tasks, ideally repetitive, tedious, and physically laborious work where there is little job satisfaction and little or no opportunity for advancement. In addition to automating the right kind of tasks, these technologies should be created in a way that enables people to control and operate those autonomous machines that are performing the physical labor.

Most importantly, the impetus to innovate in this domain must come from an intent to automate tasks for workers in order to improve productivity, rather than for abstract business reasons.

But before I share my perspective on emerging technologies in this space, I’d like to talk semantics. As Veo Robotics’ Mikell Taylor asserted, not all robotic machines are robots, which has become a conflated term. A toaster has robotic behavior, but it’s really a pre-programmed machine that, once given input, operates autonomously in order to complete a task.

This allows the human user to spend their time elsewhere, perhaps turning two pieces of toast into a sandwich by selecting a harmonious mix of ingredients. In this scenario, the human handles creativity while leaving the single task of toasting bread up to a machine that’s good at taking simple directions. I like how HashiCorp Co-founder Mitchell Hashimoto summed it up in a Wired article recently: “Humans are good at creativity; computers should be doing the repetitive work.”

This scenario, where we outsource specific, repetitive, and often grueling work to a machine so we can spend time on tasks that require creativity and innovation, can take shape in myriad ways. A farmer can think more creatively about advantageous crop rotation and a nurse can spend their time consoling a family dealing with the outcome of a loved one’s surgery. This shift away from repetitive tasks and toward more work that requires strategic thought or human intellect is an evolution which has been occurring throughout human history.

In times of rapid growth, we tend to romanticize what is lost instead of focusing on what is gained, even in regards to repetitive, physical tasks. Yet, we don’t mind when a garbage truck extends its mechanical arm to empty a trash bin into its hopper.

We certainly don’t contend to have all the answers here in The Valley, but we do think there are a number of questions we should think about and ask before investing to ensure new automation technology best affects the future of all human workers.

For example, when was the last time you encountered an empty soda bottle or crumpled napkin in an airport waiting area? Currently, janitorial teams struggle to keep large, highly trafficked public spaces like airport floors clean and litter free. Standard commercial floor sweepers can be inefficient and finding people to operate those machines is a struggle too given several factors. These factors include low job satisfaction and inherent disengagement from all human creativity and mental faculties, except the physical engagement of muscle with the task at hand.

As a solution, Ontario-based Avidbots created Neo, an autonomous floor-scrubbing robot for large commercial spaces such as airports, malls, and hospitals. We invested in Avidbots founders Faizan Sheikh and Pablo Molina in 2017, and the company is now expanding its efforts globally.

When they started the company, they did so with the mission to bring robots into everyday life in order to expand human potential. We believe they and their team can do this in a way that provides advancement opportunities to workers and higher efficiency to clientele. 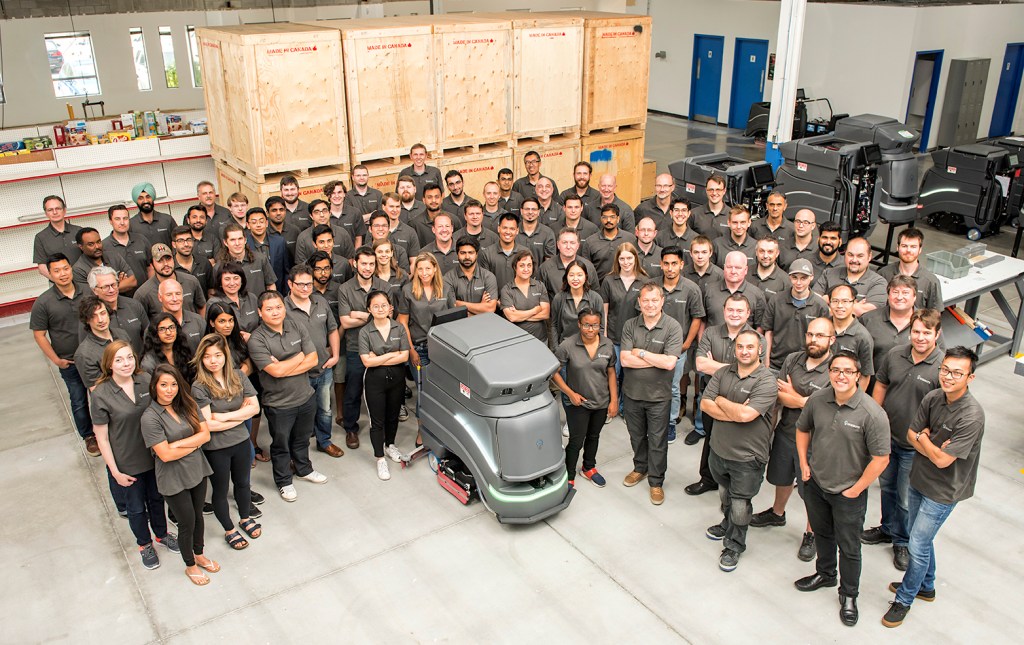 The Avidbots team poses near Neo, an autonomous floor-scrubbing robot.

The agricultural sector is seeing a similar shift in terms of who, or what, completes repetitive, physically demanding work. In 2018, we invested in Bear Flag Robotics, maker of autonomous driving technology for agricultural equipment. Bear Flag-enabled machines can till, spray, and more, freeing up time for farmers as well as reducing dependence on uncertain labor.

Bear Flag Co-founders Igino Cafiero and Aubrey Donnellan believe industrial automation is the key to helping farmers increase efficiency of everyday operations in the near term while using their information analysis technology to deal with the changing environment long term.

Another benefit of outsourcing repetitive tasks to machines is that they can run at hours when human workers would rather not. A farmer can configure autonomous machines to spray fields at any hour of the day or night based on the weather forecast. In agriculture, there are also health benefits to outsourcing the spraying of herbicides to machines which aren’t at a health risk when exposed to certain chemicals.

“There is a two-way win here where we decrease wasted human hours, which are expensive, while increasing output by reallocating that labor and increasing productivity in order to generate more revenue for farmers,” shared Cafiero. “Increasing worker productivity with automation makes people more valuable, not less valuable.”

Site Scan, a platform developed by 3D Robotics, enables autonomous monitoring of a job site. We invested in 3DR in 2012 as they pioneered drone-based automation of industrial-scale measurement and modeling for architecture, engineering, and construction.

Many of the companies mentioned above assess individual work, as in tasks that can be performed fairly independently with some oversight. There is another layer of complexity when creating technology that enables harmonious collaboration between machines and human teams in shared workspaces.

We invested in Diligent Robotics, maker of a socially intelligent robot named Moxi, in early 2018. Moxi was designed to respond to social cues from human coworkers and handle non-patient-facing tasks, such as retrieving medicine cups or clean bed linens from a supplies closet.

A study uncovered that nurses spend only 37 percent of their time with patients. Diligent’s technology allows overworked hospital staff to spend more time caring for patients, where they can apply their uniquely human skills, rather than spending the bulk of their days fetching supplies. This is a great example of increasing a worker’s value to the enterprise and improving the quality of care through judicious automation.

Diligent Robotics Co-founder Andrea Thomaz is a renowned social intelligence expert and robotics professor. “Our goal is to create robot assistants that enhance, not replace, human jobs,” said Thomaz. “If robots can take on some of the routine chores of work, it will allow the people on the team to have more time and capacity to do the parts of their jobs they enjoy most and that take advantage of their uniquely human skills: creativity and intuition.” 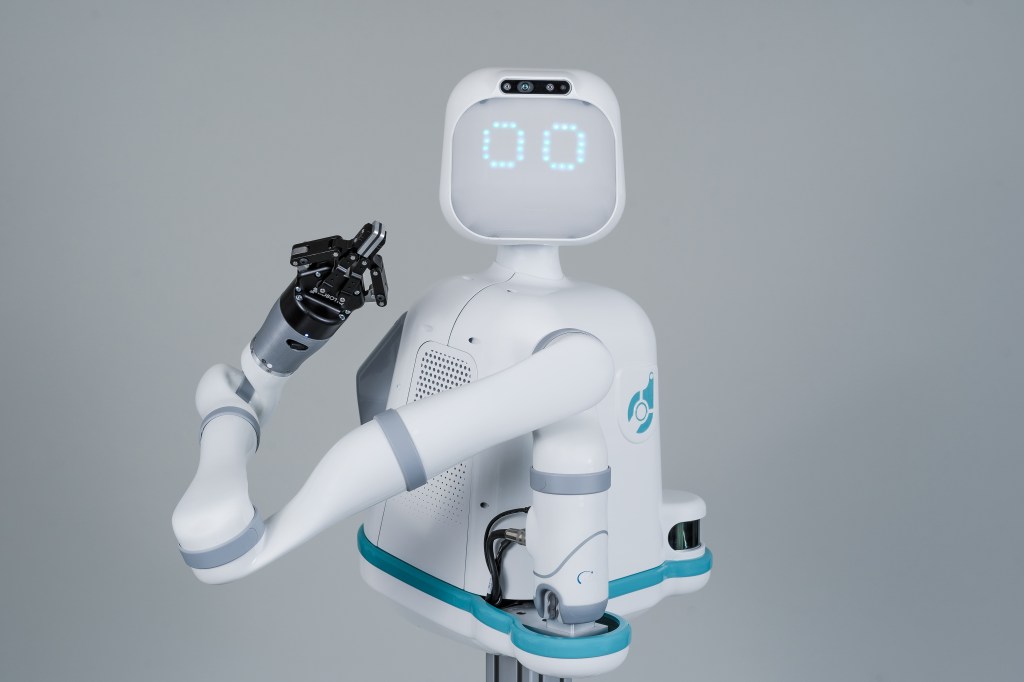 A study conducted by Pew Research Center found that 75 percent of survey respondents do not believe there will be new, better-paying jobs for humans as a result of these technological advancements. The sentiment among Americans is particularly glum.

However, investing in these emerging technologies in order to explore the potential long-term gains seems like a necessity. We have to ask ourselves the tough questions about the cost of an uncomfortable adjustment period. We hope more investments in automation advancements will create more of the jobs people actually want, which could include supervisory roles, technical maintenance jobs, fleet management roles, and more.

In the commercial floor-cleaning space, this could be the difference between an employee driving a machine manually through every nook of an airport or controlling multiple machines from a computer and ensuring machine health from a desk. These more technical but learnable jobs are the types of opportunities companies like Avidbots, Bear Flag Robotics, and Diligent Robotics can accelerate.

We don’t know the end solution to the debate of robots and automation in the workforce, but we do know we want to play a role in how to do this in a conscientious, compassionate way that results in a positive impact on society. Our greater failing would be to continue to have the human workforce rely on repetitive, physically demanding, and tedious tasks that provide little job satisfaction and make more people captive to jobs without a future.